In the light of the ongoing Ethiopia Refugee Emergency, we’ve put together an article about the relationship of Muslims with the land of ‘Habashah’.

Habashah is the Arabic word for Abyssinia, which is the ancient name for the Ethiopian empire. The word is derived from the Arabic verb ‘to collect’. What follows are seven beautiful and historic links between Ethiopia (Abyssinia) and the Messenger of Allah (saw):

1: Umm Ayman (ra), the nurse and freed slave of the Prophet (saw)

She was the supreme care giver to the Prophet (saw) and was with him from his birth to his passing. He would lovingly refer to her as ‘my mother after my mother’.

She was present during the Battle of Uhud and she would provide water and treat the wounded. She also witnessed the Battle of Hunain. She passed away either during the Caliphate of ’Uthman (ra) or most likely Abu Bakr’s (ra) Caliphate.

It is well known that the first caller to prayer was the famous companion Bilal ibn Rabah (ra) who was originally from Abyssinia.

Bilal (ra) was one of the earliest people to become Muslim. His people used to abuse him and say, ’Your lords are al-Lat and al-‘Uzzah’, to which he would respond, ‘Ahadun, ahad (One [Lord], One)’. Then Abu Bakr (ra) came to him and paid for his freedom:

Bilal (ra) was at all the major battles including Badr and Uhud. He was the first one to perform the adhan (call to prayer) for the Prophet (saw) and he would perform it at home and whilst travelling. Abu Hurairah (ra) narrated:

The Prophet (saw) appointed him as the treasurer of the Bait al-Mal (treasury for the Muslims). We get an incredible and humbling insight of the generosity and concern of the Prophet (saw) towards his Ummah from the following hadith:

On the authority of ’Abdullah al-Hawzani (ra) who said, ’I met Bilal [ra], the caller to prayer of the Messenger of Allah (saw), at Aleppo and said to him, “O Bilal, tell me how the Messenger of Allah (saw) used to spend?” He said, “He had nothing, and I was the one who would arrange his financial affairs, from the time Allah sent him until he passed away. If there ever came to him a Muslim person whom he saw to be without clothing, he would have me go and borrow some money to clothe and feed them”’. [Abu Dawud]

In appearance, Bilal (ra) he was extremely dark, thin, tall, with a curved nose and a full head of hair, and a little dark and grey hair on his cheeks. Bilal (ra) passed away in Damascus in 18 AH, when he was over 63 years old.

3: The place of the first two migrations (Hijrahs)

The following ayah was revealed alluding directly to migration and that Allah’s earth is spacious:

’Say (O Prophet (saw) that Allah says), “O My servants who believe! Be mindful of your Lord. Those who do good in this world will have a good reward. And Allah’s earth is spacious. Only those who endure patiently will be given their reward without limit.” [The Noble Qur’an, 39:10]

In the 5th year after Prophecy, in the month of Rajab, a group of Companions (ra), 12 men and 4 women migrated to Abyssinia. These included ‘Uthman (ra) with his wife Ruqayyah (ra) (who was the Prophet’s (saw) daughter), as well as az-Zubair (ra) and Ja‘far (ra). They remained there for approximately ten years.

The Prophet (saw) wrote the following letter to the Negus,

’In the name of Allah, the Most Gracious, the Most Merciful. From Muhammad, the Messenger of Allah [saw], to an-Najashi, king of Abyssinia. I praise Allah, the King, the Pure, The Perfect, the Bestower of Faith, the Overseer. I bear witness that ’Isa ibn Maryam [as] is the spirit of Allah and His word which he placed into Maryam [as], the virgin maiden, thus she bore ’Isa [as]. I call you to Allah alone without any partner [to Him,] and to follow me and believe in that which has been revealed to me, for I am the Messenger of Allah. I have sent my cousin Ja‘far [ra] to you with a party of Muslims. Peace be upon those who follow the [true] guidance’.

The second migration to Abyssinia included 83 men and 18 women. This time the Quraish despatched ’Amr ibn al-’As and ‘Abdullah ibn Abi Rabi‘a (before they embraced Islam) with gifts for the Negus and his bishops. Their intentions were to bring back the Muslims to Makkah for causing trouble amongst tribes and for abandoning their forefathers’ religion.

They failed to persuade the Negus.

The Negus guaranteed safety and security for the Muslim refugees and returned the Quraish’s gifts and envoys back to Makkah. The Muslims continued to live in Abyssinia in peace till they migrated to be with the Messenger of Allah (saw) in Madinah.

His name was Ashamah ibn Abjar. All the kings of Abyssinia were all given the title the Najashi (Negus), just like the Persian kings were named the Kisra (Khosrow), the leaders of the Roman empire were called Qaisar (Caesar) and the kings of Yemen were given the title Tubba’. His name Ashamah in Coptic corresponds to the Arabic ’Atiyyah (gift) in Arabic according to the great biographer Ibn Ishaq (rh).

As mentioned in the previous point, the Prophet (saw) sent two Muslim delegations to him for safety and security.

The Prophet (saw) also ordered the Negus to send his Companions (ra) to Madinah and give them provisions to make the journey from Abyssinia. Again, the Negus did so.

The Prophet (saw) not only referred to the Negus (ra) as a ‘pious man’ in the hadith above, but also called him, ‘a pious servant of Allah’. [Muslim]

’Abdur Rahman ibn Yazid ibn Jabir (ra) said, ’It reached me that the Messenger of Allah (saw) said, “The masters of the black people are four: Luqman [the wise whom Chapter 31 in the Noble Qur’an is named after], Mahja‘ [the freed slave of ’Umar (ra) and first to martyred in the Battle of Badr], Bilal [ra] and an-Najashi [ra]”’. [Ibn ’Asakir]

The Negus’ final resting place in Abyssinia is known for a sweet fragrance of musk and illumination. ’Aisha (ra) said, ‘When the Negus [ra] died, we used to mention that a light could be seen perpetually upon his grave’. [Abu Dawud]

5: The Prophet (saw) honours and serves the delegation from Abyssinia

SubhanAllah, the Prophet (saw) didn’t forget how the Abyssinians welcomed his vulnerable Companions (ra), and the incredible support the Negus gave to the Muslims:

The Prophet (saw) himself stood up to serve the people of Ethiopia, and we are honoured to be able to continue this beautiful Sunnah today. You too can emulate the Prophet (saw) by standing and providing aid to Ethiopian refugees who are fleeing to Sudan today.

6: The clothing of the Prophet (saw) - his Khuffs and signet ring

As for the signet ring of the Prophet (saw), it was crafted in 6 AH after the Treaty of Hudaibiyyah by Ya’la ibn Umayyah (ra) in Madinah. It was described in the following hadith:

Anas ibn Malik (ra) reported that the Prophet (saw) used to wear a silver ring on his blessed right hand which had an Abyssinian gemstone in it, and he kept its stone towards the palm. [Muslim]

The gemstone was made from onyx or agate (’Aqiq), both of which were brought from the mines of Abyssinia. ‘Muhammad Rasul Allah’ was written in a manner in which each word written on a separate line in ascending order. The Prophet (saw) would use this ring to seal official correspondence to kings of his time as they would only accept letters that were sealed.

We have a further description of his blessed ring:

The subsequent Caliphs Abu Bakr (ra), ’Umar (ra) and ’Uthman (ra) used this ring for their correspondence after the Prophet (saw) passed away. Unfortunately, the ring fell out of the hand of ‘Uthman (ra) as the Yemeni companion and the ring bearer Mu‘aiqib (ra) passed it to him. It fell into the well of Aris outside of Madinah in the vicinity of Quba in 30 AH. (This is the same well that ran dry and the Prophet (saw) spat into it and miraculously the well water gushed up to receive his blessed saliva).

They searched for the ring for the following three days but it was never found again. Many scholars believe that this marked the beginning of tribulations in the Islamic world right upto the present day.

The Negus (ra) sent the Abyssinian tribe of Banu Arfidah to protect and serve the Messenger of Allah (saw) and his noble family. They are the ones who on the days of Eid in Mina were playing with shields and spears in the Masjid and the Prophet (saw) and his wife ’Aishah (ra) were watching their display. Then ’Aishah (ra) mentioned,

’I was being screened by the Prophet (saw) while I was watching the Ethiopians playing in the Mosque. ’Umar rebuked them, but the Prophet (saw) said, “Leave them. O Bani Arfida! Play (for) you are safe’. [Bukhari]

If you would like to find out more about the connections between Islam and Abyssinia, please refer to ‘Illuminating the Virtues of Blacks and Abyssinians’ by al-’Allamah Abu al-Faraj ibn al-Jawzi (rh) [died in 597 AH / 1,200 CE].

Help the people of Ethiopia

There is absolutely no doubt that there was a deep and beloved connection between the land of Abyssinia and the Prophet (saw). To the extent he even urged his Ummah to ‘Let the Abyssinians be as long as they leave you alone’. [Abu Dawud]

We find ourselves with the distinct honour of fulfilling one of the Sunnahs of the Messenger of Allah (saw) by serving and repaying the people of Ethiopia, whose forefathers once provided refugee and shelter to the persecuted early Muslim community.

Our teams in Sudan are distributing emergency relief to Ethiopian refugees right now, including food and essential items like PPE. Let’s not hesitate to rush to the aid of the Ethiopians in their hour of need.

Previous Article The Origins of Islam in East Africa 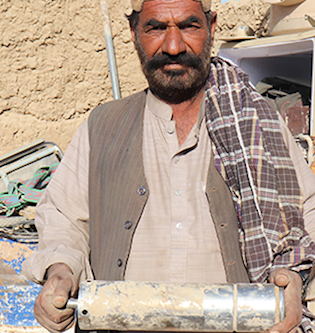