With so much need in communities around the world, it can be tricky to decide where to give your Qurbani. Simply choose this option, make your donation and our experts will distribute your sacrifice to the people who need it most inshAllah.

Do your bit to tackle world hunger this Eid and give a Prophetic Qurbani in Asia, ensuring families in need can enjoy Eid with a rare meal of meat

Do your bit to tackle world hunger this Eid and give a Prophetic Qurbani in Africa, ensuring families in need can enjoy Eid with a rare meal of meat

Give your Qurbani in an emergency zone like Yemen, Afghanistan or in a Syrian refugee camp and ensure vulnerable families in need can enjoy Eid with a rare meal of meat

Be like the Prophet (saw) and give an extra Qurbani

'The Prophet (saw) sacrificed for the one who could not sacrifice from his Ummah, one who bore witness to the Oneness of Allah and [his] Prophethood' [Tabarani and Ahmad].

During the days of Eid al-Adha, the Prophet (saw) would not only sacrifice an animal for himself, but he would also offer a second Qurbani on behalf of the Muslims who could not afford to do so.

This year, revive this neglected Sunnah by giving an additional Prophetic Qurbani. By doing this, you will be providing meat to even more needy families, many of whom can not afford to purchase meat, no matter the time of year.

During the days of Eid al-Adha, the Prophet (saw) would not only perform an obligatory sacrifice for himself, he would also offer a second Qurbani on behalf of those in his Ummah who could not afford to.

‘The Prophet (saw) sacrificed for the one who could not sacrifice from his Ummah, one who bore witness to the Oneness of Allah and [his] Prophethood’. [Tabarani & Ahmad]

This year has been a particularly difficult one for those who were already struggling and their suffering weighs heavy on our hearts. By following this beautiful Sunnah and offering an additional, Prophetic Qurbani, you will not only double your reward, but you will also double your impact by ensuring even more families have nutritious meals during the blessed days of Eid al-Adha.

give your obligatory qurbani today

Revive the Sunnah and DOUBLE your impact!

When Zerjan's husband died, she was left to raise four children on the meager wages she earns as a maid.. The family relies on meals of cooked tomatoes and onions, occasionally adding lentils and vegetables for nutrition.

Zerjan's children are frequently ill because they don’t have enough to eat. She counts the days to Eid-ul-Adha when she can give her children the meat they desperately need.

This Eid-ul-Adha, your sacrifice will ensure a family like Zerjan’s can share in the blessings of Qurbani and enjoy a rare meal with meat.

Bakoura Tarore and her family of twelve are forced to live in a 2 room outbuilding held together with wooden poles and sheets of iron in the Kalaban Koura district of southwestern Mali. Since her husband died, Bakoura has been struggling to provide her family with basic food.

Both Bushra’s children and Bakoura's children deserve to enjoy a meal with meat on the days of Eid.

By giving a Prophetic Qurbani, you don’t have to choose between two families like Bushra’s and Bakoura’s – instead, you can double your impact and feed both families on Eid-ul-Adha. 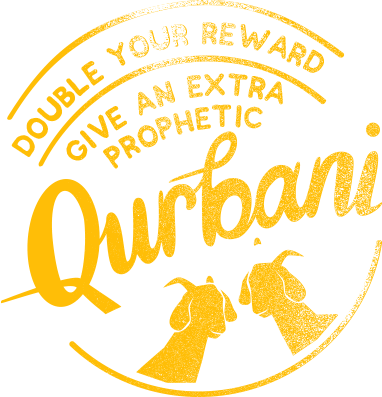 The Importance of Donating Qurbani

Qurbani is not only a requirement upon all able Muslims, but it carries great meaning, representing the sacrifice that Prophet Ibraham (as) was prepared to make in honour of our Creator.

Our teams are on the ground providing you with tiered contribution amounts upwards of $60, allowing you to give within your means. At this joyous time, no one should be excluded from the blessings of Eid al-Adha.